Windows are one of the most important features in your home. And if windows look bad, appear unsafe, or are not energy efficient it can significantly impact the value of your home and the living conditions inside. This is why it is so important to watch for signs of damage. And if you notice any one of these common problems, you should think about getting replacement windows in Seattle, WA as soon as possible.

It may not seem like much, but years of exposure to the elements can do a number on your window screens. And a sagging or damaged window screen can have a major impact on the appearance and functionality of your windows. Fortunately, screens are fairly easy to replace. You just want to be sure the damage doesn’t go beyond the window screen.

Broken glass on a home window is pretty obvious. And broken glass can render your window inefficient and unsafe. So even if just one panel of the glass is broken, you still want to get the window replaced as soon as possible.

Window frames should hold up for several years without any signs of damage. But eventually, the material will weaken and the frame can start to rust, warp, or rot from exposure to sun and moisture. Most builder-grade windows will only last about 15 years before it is time to get replacements.

When it comes to windows, smooth operation is more than a simple convenience. It is also a safety concern. If your windows are sticky or difficult to open and close, you want to get that problem fixed quickly.

This is another common problem, and windows don’t even have to be that old. Exposure to moisture as well as hot and cold temperatures will wear out the seals on your windows. Fortunately, these problems are often easily fixed with a quick trip to the hardware store.

Air leaks are a major concern when it comes to efficiency. The last thing you want to do is literally throw money straight out the window during heating and cooling seasons.

Water damage is a major concern. What often starts as mere discoloration can quickly transform to mold, rot, and peeling paint. And if left too long, a leak can damage the substructures of the home that would require costly repairs.

If you live on a busy street noise pollution can be a major problem, especially with old windows. Modern technologies allow windows to block unwanted noise transmittance. 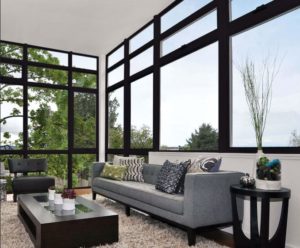 9. Condensation between the Panes

Broken locks and latches are other common problems for old windows. It isn’t much you can do to repair them, especially if parts are no longer in stock. Modern windows have more robust locks and latches for better durability and security.

There is one surefire way to fix all your window problems. That is with replacement windows in Seattle, WA. For help finding the right products contact Signature Window & Door Replacement.

Need new windows?  Call us for a quote. We can help nationwide.

Find a Window Contractor Near You